This is 26 June 1944 St. Manvieu-Norrey (west of Caen), France.  Kurt Meyer’s “Hitlerjugend”  met up with the 6th Royal Scotts Fusiliers advancing behind a Creeping Barrage in the rain.  The Scots need to take the multi hex buildings and kill the Panthers.  The Germans need to have MMCs surviving within a big magic circle at the end of Turn 6.5 and blow the Scots’ CVP cap of 39.  . 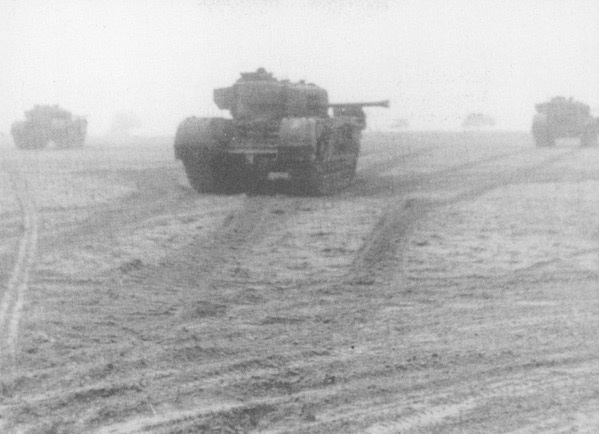 As the Scots, we get two Creeping Barrages, which I did NOT manage well.  While I credit the left barrage for killing a Panther in the first turn, it crept way too slow, to the extent that it blocked our troops and hence protected the Germans!  The right one worked out okay.  You can plan for Creeping Barrages to go “forward” 2 hexes only in your player turn or on both your player turn and your opponent’s turn (Defensive Fire Phase).  An attacker should really count out where he needs to go and how quickly the Creeping Barrage would allow him to get there. A slow barrage gives defenders a good pounding (or encourage them to leave).  A fast barrage might run away from you and hop through the defending lines.  I needed the left barrage to take out the little enclave on the German left, so I made it go slow.  What I should have done is to plan for a lifting of the barrage post enclave so that my troops could hit the village. 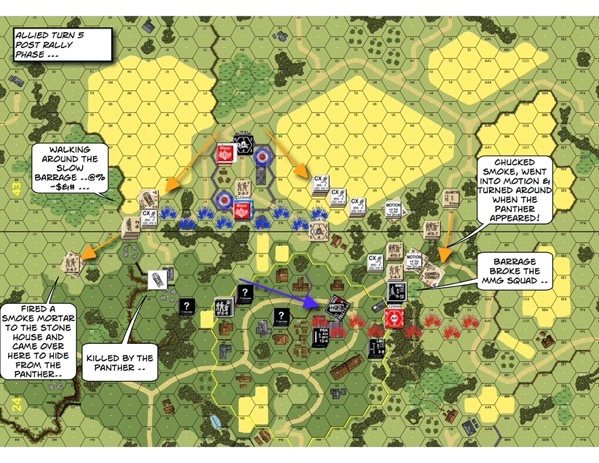 The Churchills are great smoke machines.  Unfortunately that thing is slow and I need to be careful about not getting it in places where it could get caught by a fast moving Panther!  It can’t do anything to a Panther frontally (apart from DI shots) yet the Panther can flick a toothpick at a Churchill and it will go “Boom!”.  I lost one of the Churchills that way.  Good thing another Churchill fired off its Smoke Mortar quickly and went into motion!  That barrage on the left was totally in my way on Turn 5, my folks had to walk around it.

The unexpected happened!  Instead of walking away from the Panther, my infantry rushed it and the Panther malf’d it’s MA!  So one of Churchills spun back around and slid right next to the Panther in bypass.  It had to do an ESB for the extra 1 MP to stop the Churchill for the shot but since it’s a chance to bag the second Panther, we took it anyway.  The Churchill rolled and immobilized.  We then moved other assets in place around the Panther.  The Panther wasn’t able to repair it’s Gun but what followed was shots after shots from 2 Churchills, a Piat and a couple of CC attempts.  The Panther just won’t go down (DI or otherwise)!  Plus on top of it, my Piat malf’d and my Churchill’s MA malf’d!  Everything else went rapidly downhill towards the end of Turn 5.  We were absolutely blocked by our own Creeping Barrage on the left and everyone’s either malf’d or broken or straight up vaporized on the right.  The Germans must have rolled about 6 snakes.  It’s tragic!

(A specific account on our attempt on the second Panther)

In the last German turn the Panzer fixed its gun!!  It took out the immobilized Churchill sitting next to it and a shreck took out the other Churchill that was angling for a side shot.  The Germans just hit the Scots’ CVP cap!

I obviously mismanaged my Creeping Barrage but I will definitely do it better next time.  Apart from that this is quite the scenario!  There were tons of action and while I am really “hampered” by the slow Churchills, it’s a ton of fun!