The situation’s not pretty from the start, the Swede OB was cool but not Finnish-self-rallying cool.  The Russians came in two directions with 24 (6 on ski’s) squads and 2 leaders.  The Swedes had 9 squads and 3 leaders and all of them on ski’s.  Extreme Winter, Winter Camoflage and Deep Snow’s in effect (did I mention it’s cold?).  The Russians have to force all Good Order Swedes out of a 7 hex magic circle drawn in the Woods within 5.5 turns.

By Turn 2, the Swedes were already suffering heavy losses (KIA’d a 8-0 too) plus morale’s breaking all over, level 8 or not.  They had the same range as the Russians, which didn’t allow them to take good advantage of the Open Ground that he Russians had to cross.  Russians were taking on an orderly pattern of moving and doing big firegroups.  What we were most wary of were Human Waves that would propel the Russian quickly over that Open Ground (snow).  We tried to keep LMG’s in firelane positions and put Half Squads out to catch Human Wav’ing Russians forward.  However at the rate at which we took casualties, I would be amazed if we could hang on (as the Swedes) to the magic circle for 5.5 turns!

Somehow we kept the Russian hordes in the open for a little while longer.  We were still careful about  keeping HS’s between our main forces and the Russians to fend off potential Human Waves but none materialised.  Timing is everything, if we duck into the Woods too early it would give the Russians free passage across the snow. 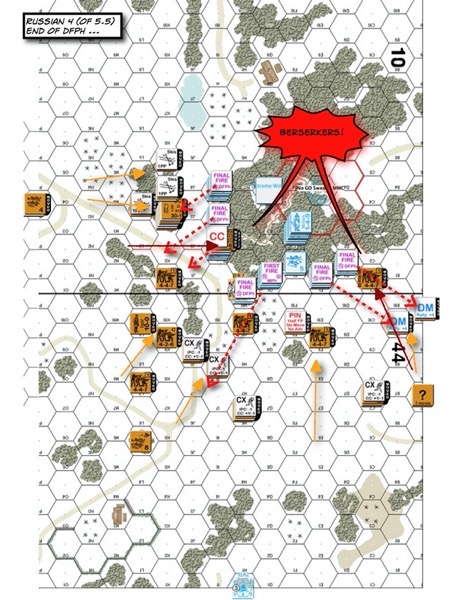 We fought hard to not let the Russians flank us.  Unfortunately two berserkers popped up and punched holes in our lines.  At the end of the turn we would see one melee and most Swedes melting into the Woods.  We ran out of Open Ground already!  Okay, 2 more Russian moves to go.

We deployed to cover more ground and some of our troops rallied.  In our last MPh, a HS drew fire by placing a Demo Charge on a 2 x 447 stack.  It got shot to bits, a Hero ran in, picked up the DC and tried to place it again, he too got blown away by Subsequent Fire, The good news was that the Residual wasn’t placed in our “escape” hex.  A leader picked up the DC, backed up through the escape rout and casually chucked it at the 2 x 447 in Advance Fire Phase.  That package of love didn’t do anything to anyone.  Well, we did try!  On the otherhand a Hero on the right sneaked up to a Russian brokie.  He ambushed the brokie, killed it and positioned himself to interdict the incoming Russian MMG team.  The rest of the Swedes formed up into a hedgehog inside the magic circle.  The Russians conceded.

How is this Scenario Interesting?

This is classic quantity vs quality.  I count myself lucky to not have seen a Russian Human Wave over the snow.  That would have likely given the Russians a lot more time to work the Swedes over in the Woods.  I mean, these guys had more squads than I had bullets!  Close Combat in the Woods with 9 squads vs 24 is not a welcomed prospect either.  As I mentioned earlier, timing is everything with this scenario.  The Swedes had to hold their ground until towards the end even though Russian firegroups (and Berserkers) were breaking the Swedish lines all over.  Then again, the ROAR records on this scenario is 11:4 in favor of the Swedes, perhaps I am being a bit of a drama queen here.