This is got to be one of the shortest scenarios I have ever played!  It’s April 2 1945 around Siegen, Germany.  The US 8th Infantry Division (“Golden Arrow Divison”) along with some armor were met by paratroopers from the 6th Fallschirmjäger Regiment.  The Americans win if they have more MMCs than the Germans on Level 1 across (map left) the Sieg River in 4.5 turns.  The Americans brought a M4A3 with a 105mm howitzer (US Vehicle Note 17) for infantry support and a M10 TD (US Vehicle Note 23) to back the Sherman up.  The Germans had a StuPzIV “Brummbär” (German Vehicle Note 37) which sports a 150mm howitzer, practically a DC hurler on tracks!

The Germans started with 5 squads, 2 reinforcing.  The Americans ran with 7.  Apart from pushing across the river, they best whittle each other’s forces between movement phases.  The Germans have better morale and better cover but a shorter range and an ELR of 2.  The Americans can win most firefights but their morale is not the best for moving under fire.  We would have to rely on a lot of smoke.  Good thing the M4A3(105) got a lot of it (WP9 S7 sM8).  I planned to use the M4A3(105) to help get rid of the German infantry and the M10 was to keep the Brummbär away.  Having said that, the M10 with its open top would try not to let the 150mm roving howitzer have the first shot. 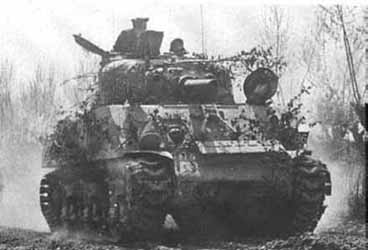 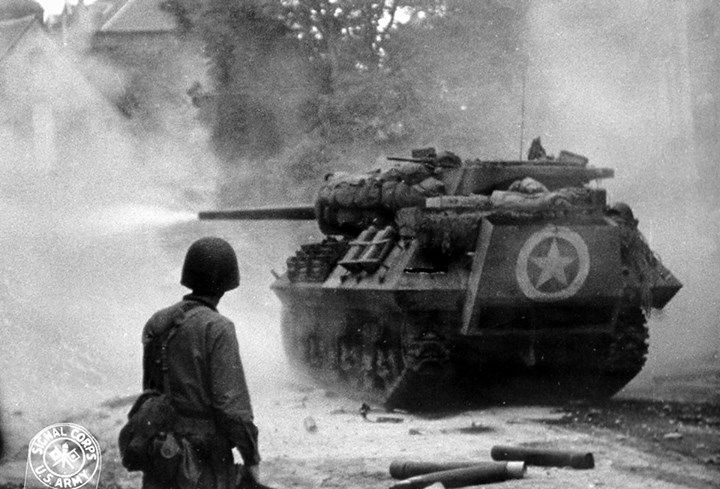 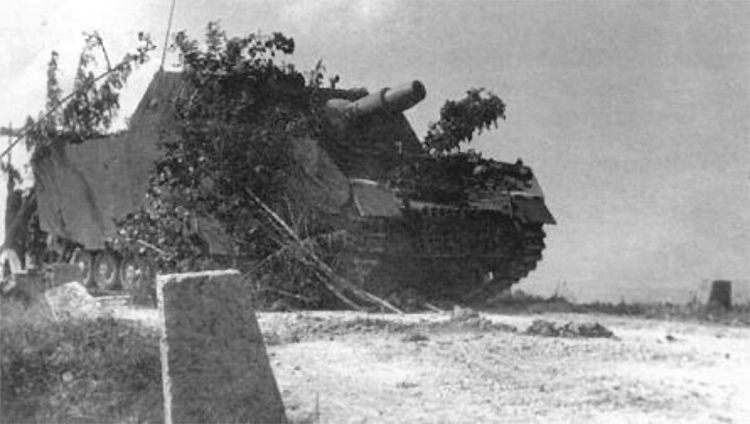 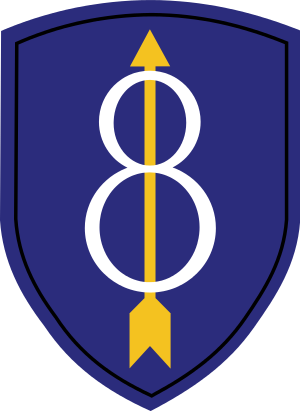 We managed to clear off the hill top on my left (map bottom), but not without suffering a few broken squads.  Some Germans sneaked back on the hill to the right, plus the Brummbär hadn’t moved yet, hmm ..

Later in Allied Turn 3:  The German (+reinforcements) were already scrambling onto the hills over on the north shore.  One dang HS managed to pull a panzerfaust and burned my Sherman!  I meant for it to go hulldown around the building in W5, so much for that now.  That left my M10 weaving its way up hill to get a better shot across the stream while avoiding the Brummbär.  I had a leader snatch a baz from some brokies and delivered to the chaps at Y7.  A HS had also gotten behind the Brummbär. However, a HS’s CCV is 3 (-1 CE target).  We wondered as to whether the HS should go for the CC or jump into the river.  These fellas were screaming themselves hoarse and throwing beer cans but the Brummbär didn’t seem the least bit bothered.  Everyone need to cross the stream in the next 2 turns.

Turn 4 and it was now or never.  We figured if we move our TD last we could keep the Brummbär in place while we move everyone closer to the stream.  Once in the stream they should be able to scramble up the hill on the north shore (map left) with a move vs Difficult Terrain.  TD’s there VBM’d against the building to keep the Germans getting close enough to give us enough firepower and to provide some smoke in the last turn.

Last Movement Phase! There was a CX’d German HS behind my TD. I could back the TD up, go through the “sunken road” in W7 and try a non-hulled down side shot on the Brummbär. I’d be chancing a successful panzerfaust pull from the HS and if the TD bought it, it’s out of the game. I could drive the TD forward in full view of the Brummbär and try to lay Smoke or better yet, threaten to shoot the monster. If the Brummbär shoot back and/or blow me up, that would have protected my infantry. So that’s what I planned to do. First, I advanced a couple of squads into the stream, the Germans shot back but it wasn’t too bad. Unfortunately no one could find any smoke grenades to toss back up to cover the TD. Ah well, the TD crew thought, everything in their lives had evidently brought them to this point. So it rolled forward, turned and moved towards the Brummbär. They hoped to lay some smoke for the 9-2 platoon that’s waiting to move but the smoke pot didn’t work either. The M10 drove straight up to the Brummbär and stopped, open topped vs 150mm howitzer. The Brummbär refused to be distracted, it wanted the 9-2 platoon. The only way the TD could be cover for the 9-2 platoon is to be a wreck and the Brummbär wouldn’t allow that! The TD went for a round of APCR, and the round sailed over the stone wall …

It connected!! The turret hit wrecked the Brummbär. The 9-2 platoon gleefully splashed into the stream, survived the residual and cheered!

The Americans won this round by putting 7 squads on Level 1 vs the German’s 5.