The time was 25 August 1937.  This was the second time the IJA attacked Shanghai.  The IJA Shanghai Expeditionary Forced landed troops around Liuhe (浏河), Wusong (吳淞) and Chuanshakou (川沙口) as a diversionary to draw GMT troops away from Shanghai.  This scenario depicts an engagement where the IJA troops pushed rapidly inland to encircle Shanghai.

This was a 7 turn scenario in which the IJA needed to control 10 or more buildings at the end.  The GMT (Chinese) had 13 first liners, 1 MMG and 1 LMG led by an 8-1 and an 8-0.  They were reinforced by 4 elite squads with 2 other leaders on Turn 4.  The IJA started with 13 first liners led by 3 leaders.  They were reinforced by a platoon of elite squads plus another leader on Turn 3.

There was an eastern approach for the IJA (top of the map).  That approach led through jungles paths and onto a hill before a group of target buildings.  There was also a western approach where the IJA had to navigate across a shallow stream and fight their way out of a depression.  I guessed the eastern approach would be guarded heavier as the trek was slightly easier and targets richer.

I deployed with 60% of the IJA troops on the east side and 40% on the west with 2 squads HIP’d.  Hopefully that would cause the GMT to lean a little towards the east. 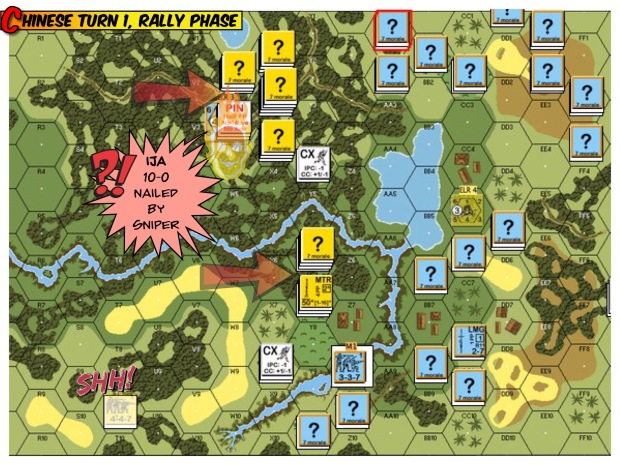 Chinese Turn 1: Calamity hit the attackers almost immediately.  An observant GMT sniper seek out the highest ranking (10-0) IJA officer amidst a concealed stack and put a round through his head.

Not that it bothered the troops too much, they stayed out of sight a little and continued moving on.

Chinese Turn 2: As the IJA approached the Chinese forces, an IJA HS was indignant that these brothers of the Greater Asia Co-prosperity Sphere shot at them.  They went berserk but their target GMT squad routed away.  A concealed GMT squad then moved in but failed to ambush the fuming mad IJA berserkers. 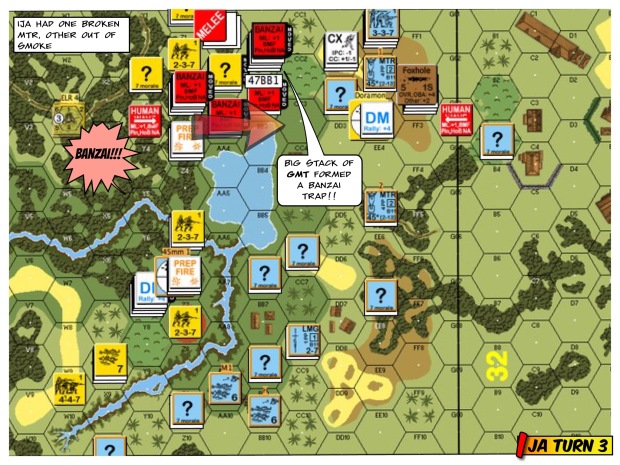 IJA Turn 3 : The IJA decided to Banzai through the bottleneck on the left flank around the lake.  They almost immediately ran into a dangerous “Banzai” trap – a previously concealed stack of high fire power GMT that killed the led Banzai troops and threaten to suck in more.  Good thing I was able to avoid having an IJA leader sucked into that hex. 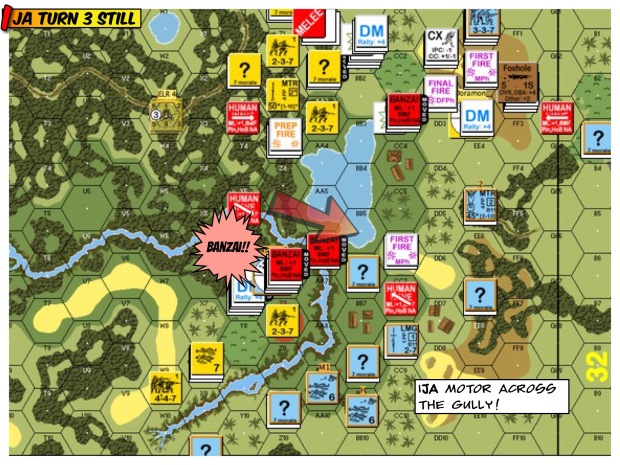 IJA Turn 3 still : The IJA on the right flank begin the second Banzai to motor across the shallow stream!

IJA Turn 4 : The turn would see the right flank of the IJA banzai the rest of their troops over the shallow stream. 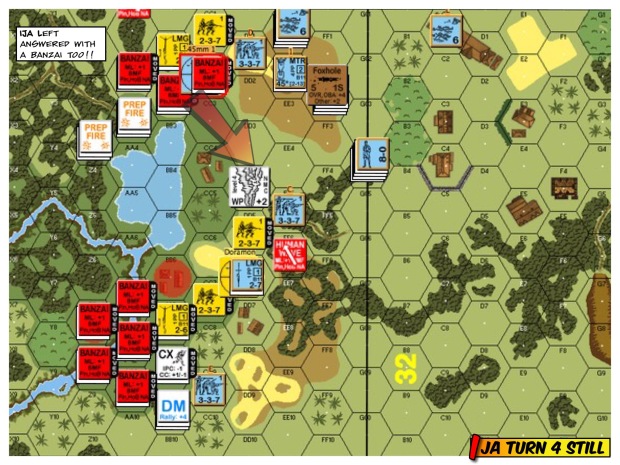 IJA Turn 4 still: The left flank answered with a Banzai to the center of the board and not directly up the hill itself.  This was where I channelled my inner IJA and looked to infiltrate!

IJA Turn 5 (errata – picture is wrong): The right flank banzai’d over the hill and looked to encircle the GMT defenders.  Unfortunately it didn’t quite work out.  Always an issue banzai’ing in the open.

On the otherhand, the left flank got up (and around) the hill and encircled the defenders there. 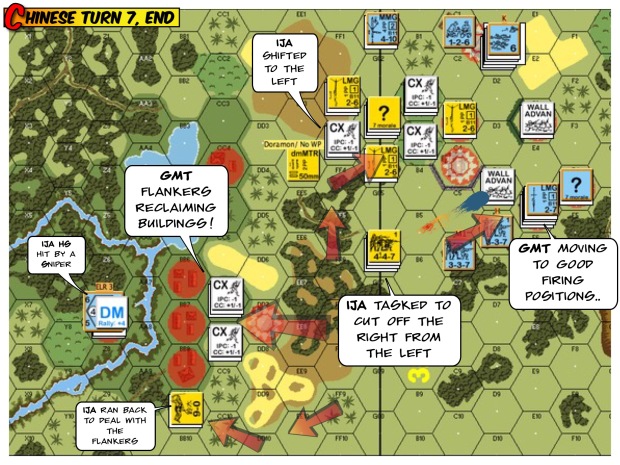 Chinese Turn 6 (errata -picture is wrong) : Quick as you might think the IJAs were, I began to run out of time. I shift the IJA troops from the right to the left in preparation for the final push.

But look – the GMT ran a couple of squads and a leader around the IJA right flank and threatened to reclaim the buildings again! 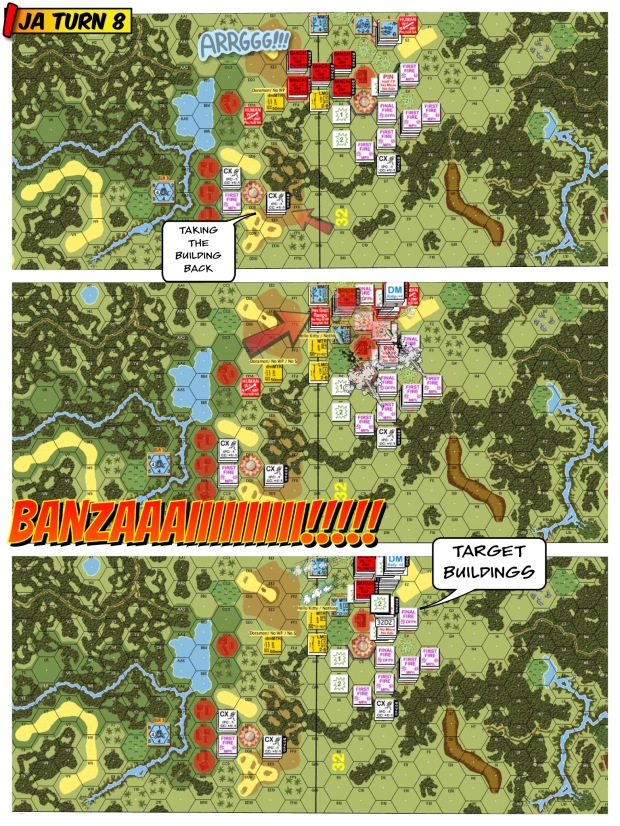 IJA Turn 7 (errata again!) : The IJA did a massive Banzai charge on the left flank into the cluster of target buildings behind the bamboo forest.  GMT troops in the jungle to the west put up a ferocious volume of fire! The IJA couldn’t get into all of those buildings (missed 1, IJA pinned).

The End : At the close of IJA Turn 7 – the IJA got 9 buildings but stood to lose a few more in the counter attack – plus looked to lose 2 to 3 more to the GMT troops reclaiming buildings to the north (left of board).

It was a great game played with Peter-James Palmer in Australia.