The Soviets launched Little Saturn on Dec 16 1942, looked to destroy the Italian 8th Army and to cut off relieving forces to Stalingrad.  This scenario set in the Arbuzovka valley on December 23 1942 depicts Axis efforts to break out of the encirclement.  The Germans and the Italians did break the encirclement historically.  With 10,000 Axis dead, 5,000 wounded/ frostbitten and 10,000-15,000 taken prisoners, Italian soldiers called it the “Valley of Death”. 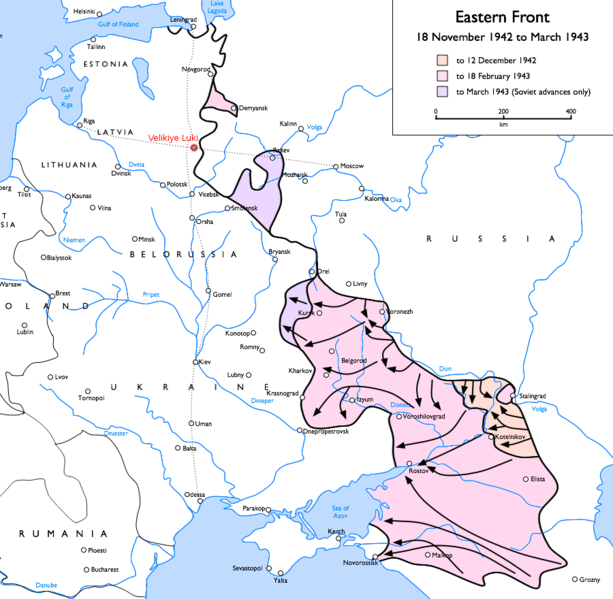 Elements of the Italian Blackshirt Brigade, Pasubio Division set up on the south (left of map) with 16 squads, 3 leaders, 1 HMG 1 MMG and 3 LMG plus 2 (little) mortars.  They were supported by 2 StuGIIIG’s.  The Axis suffered Ammunition Shortage but that didn’t factor much into our game.  The Russian 35th Guards Rifle Division set up to the north (right of map) with 5 458’s 3 447, 2 leaders, 1 LMG 1 mortar and 2 ATRs.  I took the balance in this game and so 3 527, a leader, a radio (70mm OBA) and a T-34 M41 showed up on Turn 2.  Both sides were to setup on non Hill hexes, so we both had to slog it up the Hills against Ground Snow.

The Italians had 5.5 turns to get more unbroken (didn’t have to be in good order – could be in Melee/Berserk) non-crew infantry CVP north (right) of map than the Russians, provided that the Russians hadn’t destroy both StuGs.  I marked the “victory” line beyond which the Italians had to move on the first AAR map below with a blue dotted line.

The Italians outnumber us 2:1, plus they had more long range toys and 2 StuGs.  Our Russians had better quality troops but that’s a lot of map to cover, good thing the Hills were quite barren.  The Russians would have to rely on their higher morale of their infantry and the higher mobility of their T34 m41.  That T34 wouldn’t win any long range shootouts against StuGs.  We would try to fend off an amoeba attack and to not get caught in Close Combat. 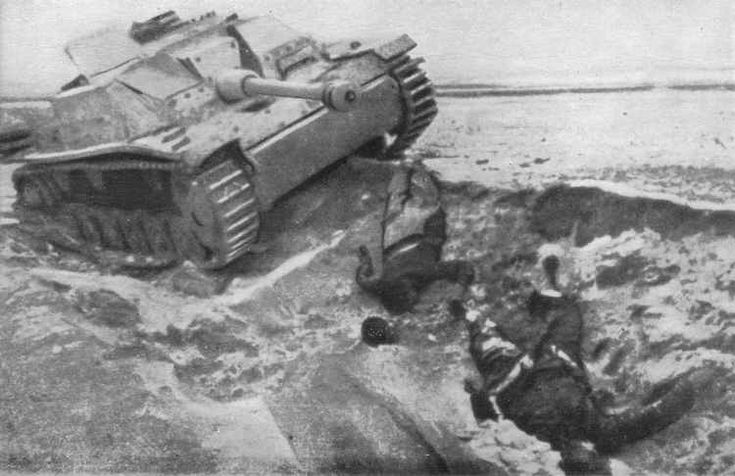 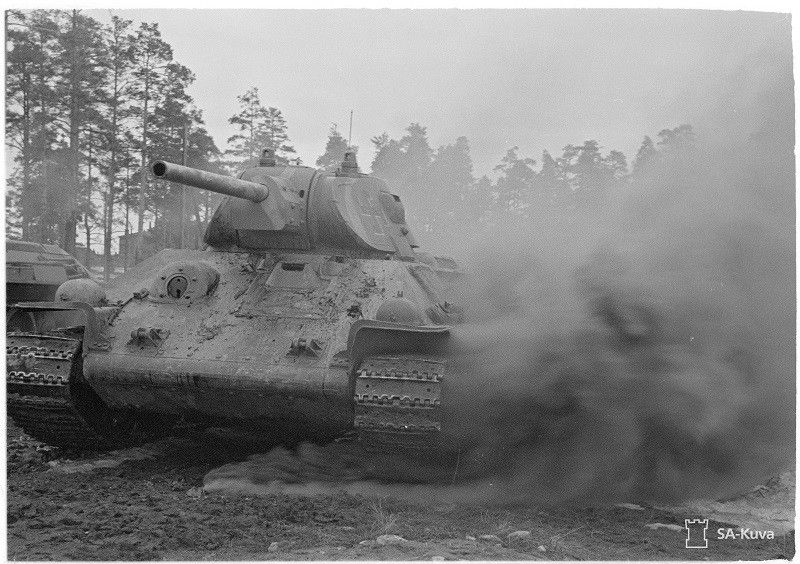 The StuG’s split off and went to both hills, threatening a pincer action, supported by a platoon each.  The platoon to the east (bottom) was of particular interest since it carried an HMG & an MMG.  I really couldn’t split off my troops since they were thin as it was.  I diverted 2 squads, a leader and an ATR to the west (top) and my T-34 to the left (bottom).  The rest of the Russians on the valley floor dutifully withdrew as their flanks were threatened.  Heck, the Italians on the hills were already shooting at my skulking Russians!  My T-34 got a lucky shot at the “heavy weapons” team.  Italians aren’t easy to rally.  I expect that to put them out of action for a little while.  (The blue dotted line is the goal line.)

I parked my T-34 on the highest point, went Hull Down and congratulated myself for how smart I was.  That didn’t last because a StuG went into a position to engage from the west Hills (top) while another StuG went to my left.  My TH was 6 (+1 BU +1 small) to the west Hill StuG but his TH was 8 coming back, and my HD wasn’t going to hold because of the StuG to my left.  Urgh!  I always thought “lone tanks die” and I was on track to prove this out again with my T34.  Hopefully the Russian squads rushing up the east Hill would save those treads!

Good thing an ATR shot broke the platoon on the west Hill (perhaps we could meet the StuG alone then) and the heavy weapons guys on the east Hill went for R&R.  The Russians in the valley were slowing the Italians down some but they were moving forward still.  Our first Spotting Round went wildly off which didn’t help things.  I needed a nice Harassing Fire to shut that party down.

The ATR team on the west (top) Hill went straight for the StuG, if it wanted to deal with us it would have to change VCA.  An ATR hit would immo on a 5, and if they pass their PAATC, immo the STuG on a 7!  But all that talk didn’t distract the west Hill StuG from our T-34.

It’s time.  I knew my T34 couldn’t fire while being CE but we threw open the hatch and tried for a vehicular smoke grenade anyway.  Nada.  Well, there goes nothing.  We gunned the engines and sure enough the first shot whizzed by!  We pushed forward off the hill and the StuG intensive fired!  The shot came real close but that missed as well.  We couldn’t believe it!  Everyone in the tank screamed “GO GO GO GO!!”.  We thought about rounding to the back of the east (bottom) Hill StuG, DM’ing the Italian heavy weapons team and going HD behind the stone wall.  Unfortunately we wouldn’t get a first shot off anyway being CE and that StuG would have a chance to spin around and we would need a 5 to kill (they needed a 6 and they had a spare AFV).  We decided to make for the area behind Italian lines.  If the StuGs wanted to come for us they would have to go the “wrong” direction and abandon their infantry.  We stayed in motion behind some buildings, hidden from the west Hill StuG.

Well, our ATR shot went wide, even when our guys were practically bracing the ATR against the side of the StuG!  “We can still go in and kill the thing!” someone yelled.  The 7-0 thought about it for a second and remembered how his momma always told him to not be a hero.

Next turn came around and as you expect, the StuG started up. POW!!  The ATR team fired again and watched the round arc’d gracefully off to the distance.  The StuG overran the Russian team.  They survived somehow and rolled around for their CC Reaction Fire.  This one’s tough ‘cause the StuG’s moving but they managed to immo the StuG with its gun pointing in a not so useful direction.

The radio guy got Harassing Fire down properly in the valley as well, catching the Italians in the open.  The Italians conceded.

Classic quality versus quantity?  The pair of StuG’s could be tough to deal with.  I thought I’d just run that T34 around (and not stopping) and lean on my superior mobility, cut rout paths and stuff.  I wouldn’t win shooting matches with either of them.  Putting Italians on the hills made it challenging for the Russians as they didn’t have the bodies to spare.  StuGs were there to lay smoke I think, without which the Italians couldn’t move safely. The Italians also shouldn’t mass up because of the OBA and so spreading them out might well be the way to go.  Some Italians might break but the Russians couldn’t shoot them all.   The StuG should do what assault guns were meant to do: shoot smoke rounds from the back and keep the T34 from getting cute.  They shoot way better at a distance anyway.  I took the balance because it’s largely an Italian win on ROAR but I can see how tough it was for my opponent.